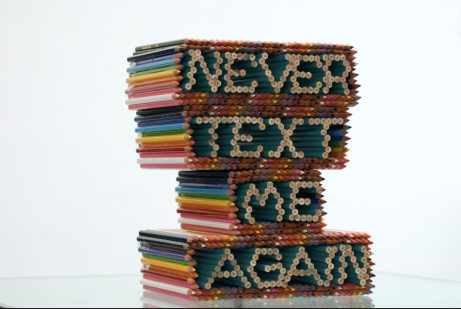 Whenever I get a text from someone, I have to go into this other ancient-seeming folder on my blackberry to get it.  It goes to a completely different folder then my other messages.  It also has a different notifier, a much harsher and blunter one, that makes me a slight bit nervous when it goes off.  “Who in god’s name is still ‘texting’ me?”

PINning, via Blackberry = mainstay.  It’s free, and caused me to encourage everyone I know to get-a-blackberry.

Twitter = get it to your phone; whenever someone @mentions me on Twitter, I can rest assured it will be far more interesting then whatever lame peice they want to put directly to me, only me, using SMS.  read: “Hey.  What’s up?”  SMS is like someone saying they are sort of bored enough to think of you, but sort of don’t want to talk to you anyway.

Letters = the only thing people love more then phone calls is letters!  I plan to bring letter writing back by a) patiently awaiting my Snail Mail from this cool project that just ended – http://snailmailmyemail.org/    and b) visiting Vancouver’s Regional Assembly of Text; there’s nothing like an actual handwritten letter to be truly appreciated by a fan.  http://www.assemblyoftext.com/